Two policy alternatives were being discussed to address the cost-of-living crisis from April 2022:

The Chancellor has opted to raise the NI threshold, which will make NI a more progressive tax. However, increasing benefits in line with inflation would be the most progressive choice of the two, benefitting the poorest more.

Neither measure would go far towards addressing the cost-of-living crisis, increasing average family incomes by just 0.8% and 0.9% respectively compared with forecast inflation of over 7%. However, they do have slightly different consequences for different families.

In this short note we compare the impact of these two policies. We find that women, pensioners, single parents, and lower-income families would benefit more from an in-line-with-inflation increase in benefits, compared to the rise in the NI threshold.

The cost for the public purse is similar: the additional increase in benefits would cost around £8.3bn this year, while the rise in National Insurance would reduce tax revenues by £9.1bn. The decision is therefore political, rather than motivated by budgetary considerations.

Not allowing the fabric of our social security system to deteriorate more by protecting the real value of benefits would be the more progressive policy, putting money into the pockets of the people for whom this cost-of-living crisis is an emergency. 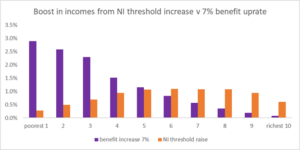 Nevertheless the rise in the NICs threshold mitigates the impact of the NICs rise on women and poorer families, and we would support this move in itself for that reason. If the Chancellor wants to recoup the tax revenue lost by the rise in this threshold, he could raise the Upper Earnings Limit accordingly.

It is vital that any fall in revenue raised from NICs is not allowed to impact on investment going into Health and Social Care. More, not less, is needed because of inflation.

Neither of the two policies under consideration do anything more than tinker at the edges of a crisis in which real incomes have manifestly failed to keep up with the rapidly rising cost of living. Far more fundamental reforms are needed if the current crisis is not to result in a substantial increase in poverty, hunger and an inability to keep warm.