And still we earn less: The gender pay gap in the UK

Impelled by the #MeToo movement, the gender pay gap in Britain has been one issue hitting headlines, generating advocacy, and putting pressure on the government and employers to act. Despite the Equal Pay Act in 1970, replaced by the Equality Act in 2010, women still earn about 20% less than men today. This is known as the gender pay gap – the percentage difference between the hourly earnings for men and women. According to the UK Office of National Statistics, the gender pay gap fell from 2017 to 2018, to stand at 8.6% among full-time employees and at 17.9% among all employees.

By law since April 2017, companies, charities, and public sector departments with more than 250 employees must publish their figures comparing men and women’s average pay across the organisation. With the most recent data relating to April 2018, 74% of big enterprises report a gender pay gap in favour of men, and virtually no change is in place: the UK’s gender pay gap for 2018 remains broadly untackled when compared to the 2017’s figures. XpertHR 2018’s analysis of 10,444 employers with more than 15 million employees’ reports show the median gender pay gap remains untouched at 9.6% (9.7% in 2017).

Figure 2. The gender pay gap in favour of men in big UK companies 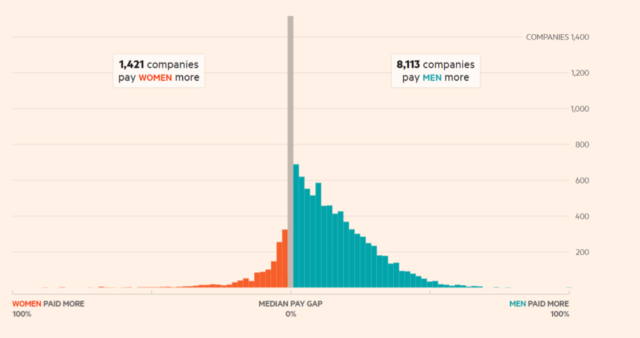 Thus, we are far from real progress. According to the World Economic Forum’s Global Gender Gap Report 2018, women will wait 202 years for the pay gap to close. Ranking the UK 52th on 149 countries for women’s equal economic opportunities and participation, the report shows that the slow progress towards equality is actually regressing, and even widening. Gender equality in the UK is an economic and rights imperative, and its roots and ramification cannot be ignored – to the point that increased attention each year has highlighted the Equal Pay Day (the next one will be on 2 November 2019), that is how far women need to work to earn as much as men did the previous year.[1]

How does the UK compare to other countries?

Across the OECD countries, the UK does not perform significantly well. Although gender pay gaps vary considerably across the OECD, in 2018 the gender gap in median earnings ranged from as high as 36.7% in Korea to as low as 3.4% in Luxembourg. In Britain, the gap is higher than the OECD-35 average of 13.5%.

The absence of improvements from the UK side, particularly in the view of the legal gender pay reporting requirements, highlights the need for major changes in corporate culture, including more measures to invite promotions, fair hiring processes, and flexible working. Although the Brexit may hold back reform, with enterprises worried about the uncertain policy framework to come, the government should also consider fines and penalties to enforce change. As figures show, the struggle towards gender equality continues to be an important mission – in the UK as at the global level – and digging into the causes of the gender pay gap is a crucial part of the conversation to close it.

What are the causes behind the gender pay gap in the UK?

Although both men and women are legally entitled to equal pay for equal work, there is a range of factors pushing discrimination and wage gap. A gender pay gap can be caused by a multitude of things, such as having fewer women in senior or more high-earning roles (and thus paid less than men in more senior positions, and more in entry level jobs) or more women working part-time.

A recent study by the Institute for Fiscal Studies digs into these causes. It shows that, with regards to economic and labour participation, there are outstanding gender differences in rates of full-time and part-time paid work of women after childbirth, which represent an important driver of differences in men and women hourly wages. Such differences affect the type and amount of labour market experience that women have, which conversely negatively impacts upon the hourly wage levels women can command. Crucially, part-time work after childbirth also holds back women’s wages, as extra experience does not equal to higher hourly wages, in contrast with extra experience in full-time employment. Women also count on less training, professional development, and networking opportunities which are pivotal for career and pay enhancement. Other causes relate to the disproportionate burden of caring responsibilities that women shoulder. Unpaid domestic labour, such as childcare, needs to be acknowledged alongside wage labour. We need to understand that gender-equal access and participation in the labour market (including issues around wages) can only be reached when an equal division of unpaid care labour is in place. As such, women and men should play equal roles at work and at home, encouraging both to share childcare responsibilities (such as through paternity leave and effective presence in the household management) to rectify the imbalance.

How to close the gender gap and #GetEqual?

A crucial question arises: Which actions, policy, and practices are likely to improve recruitment and progression of women and reduce the gender pay gap and #GetEqual in the UK?

Actions that have been tested in the real world and are working foresee a range of possibilities, such as: including multiple women in recruitment shortlists to increase chance for equal representation and pay; using skills-based assessments in recruitment processes to ensure fairness across candidates; promoting transparency practices, such as being open for criteria of pay, reward, promotion, decision-making, as well as encouraging salary negotiation commensurate with experience. Another strategy includes appointing diversity managers, who can monitor talent management processes, access internal data, be empowered in decision making and gender equality practices, and be accountable for the representation of women in the workplace.

Future actions may also include improving flexible working arrangements (e.g. remote working, compressed hours). Flexibility should be especially encouraged for men, so that it doesn’t become a prerogative of – and a prejudice against – the female workforce. Furthermore, since the gender pay gap worsens after childbirth, Shared Parental Leave and Pay, as well as Paternal Leave, should be offered and improved, including increasing leave time for fathers.[2] In turn, working mothers who return to the workplace after maternity leave should be offered guidance and opportunities to engage fully in employment. Setting public, time-bound, and fine-sensitive internal targets for corporate equality may also instigate employers to improve the gender pay gap in a realistic and clear trajectory.

However, as Josie Cox recently wrote on The Guardian, reporting issues of parity and discrimination and promoting solutions to it – including on the gender pay gap – should be about more than a PR exercise for corporations; there should be transparency and accountability in the process to ensure real progress. For now, we are waiting for what will come of it.

[1] This day is referred to as Equal Pay Day and varies according to the actual pay gap each year and by country.

[2] These points are also part of recent government initiatives.

Dr Deborah Giustini is based at the Department of Sociology in the University of Manchester, where she compares the employment conditions, expertise, invisibility, and cultural values of workers in the British, Italian, and Japanese labour markets.