Demanding Change: The Rise of Working Mothers in the Mid-Century United States

The rise of working mothers in the twentieth century was an unprecedented transformation in women’s labor history.

For my MPhil dissertation, I examined the “Roots of the Revolution” (Phase III). This phase followed the rise of single women entering manufacturing, sales, and clerical jobs (Phase I) and the removal of marriage bars – bans against hiring married women – which further eased the constraints on married women’s employment (Phase II).

We are now in Phase IV, the Quiet Revolution. Yet the roots of our modern revolution have only been minimally explored. Without better understanding Phase III, we may fail to address the continuing barriers to mothers’ employment.

Therefore, I set out to answer two questions:

Through utilizing micro-census data from IPUMS-USA, my dissertation examined the labor force participation of married mothers. Building occupational structures, mapping the regional variation in the LFPR, and regression analysis told a story of growing demand for married mothers’ labor between 1950-70.

I found that the percentage of married mothers working in services occupations increased more than 25% between 1950 and 1970. That percentage change was even larger for professional/technical and clerical/kindred jobs, respectively, between 73 and 97%. Clerical/kindred jobs include teachers, sales assistants, office clerks, secretaries, typists, and telephone operators. In tandem, married mothers in non-services jobs nearly halved:

These numbers show an overall trend in the U.S. economy – the shift from primary and secondary industry (think agriculture and manufacturing) towards our modern services-oriented economy. To explore whether rising demand drove the increase in married mothers’ LFPR, I built a second occupational structure for men:

Male occupation data provides a robust estimate of the direction of change in demand for labor. The percentage change in men in services jobs correlates positively with the percentage change in married mothers in services. However, male occupation data underestimates the growth in demand for married mothers’ labor in clerical/kindred work. The rate of change was comparatively lower for men than married mothers, indicating a gender divide in the labor market with women moving to different roles within the services sector. 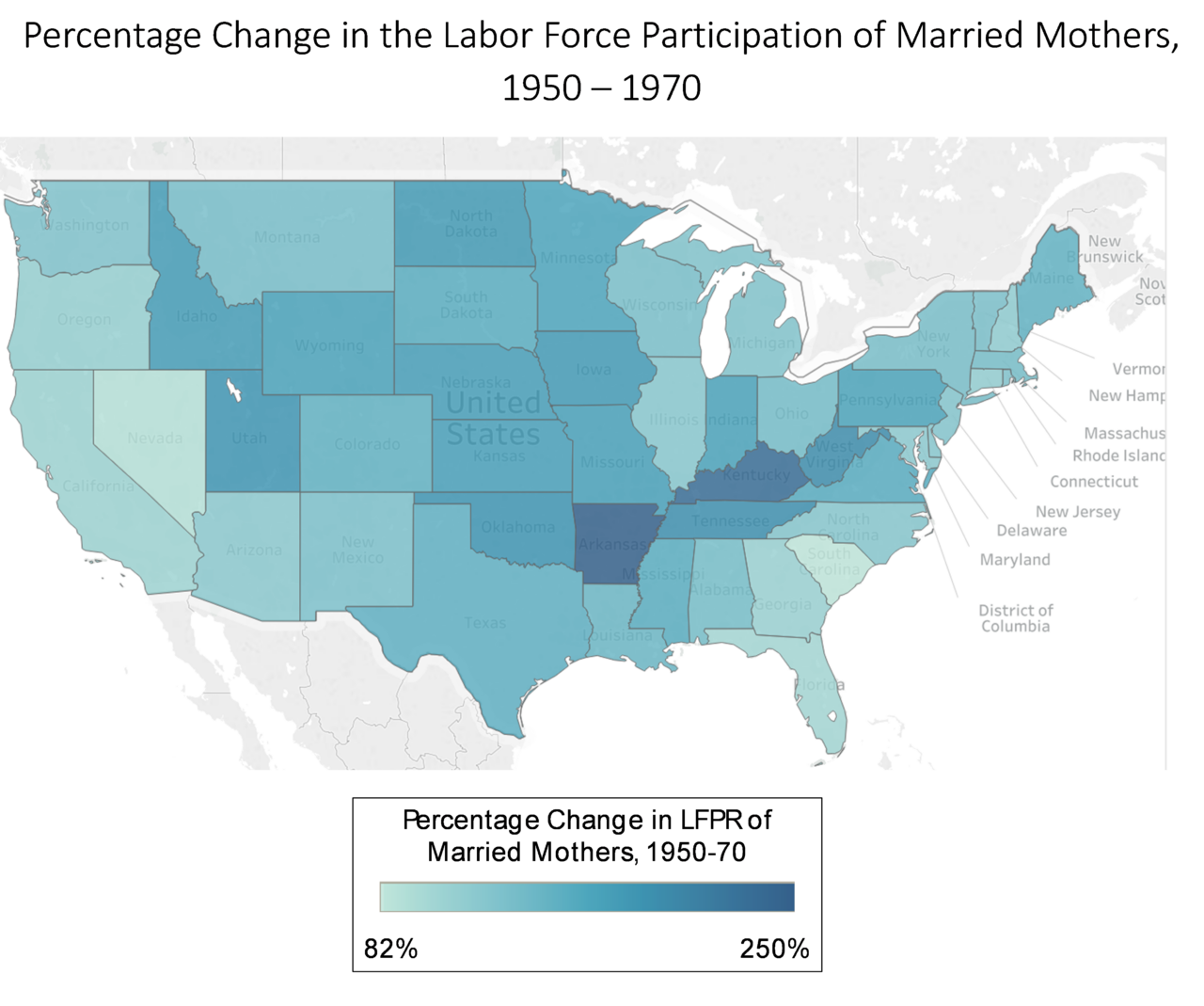 However, there was no regional (Northeast, Midwest, South, West) pattern in mothers’ LFPR changes. My proxy measure of increasing demand – men’s employment in services occupations – was marginally larger in the South. Still, overall, it did not exhibit significant regional trends either.

Therefore, change in married mothers’ LFPR cannot be explained by variables tied to a specific region; any state-level variation in LFPR reflects state-level differences in supply or demand factors that were present across the country.

Initially, I hypothesized that supply-side variables such as changing fertility, age, race, and higher education drove the increase of mothers’ entering the labor force.

My regression analysis rejected this hypothesis. Instead, the results showed that changes in female LFPR stemmed from demand, not supply, trends. Growing demand for labor in the services sector, including part-time employment, was the most significant explanation of the increasing rate of change in married mothers’ LFPR.

Mothers have always worked. But the expansion of married mothers in paid employment only began in earnest in the second half of the twentieth century.

Between 1950 and 1970, the U.S. economy increasingly shifted towards the services sector. Male occupational structures demonstrate that demand for married mothers’ labor grew. Mothers in services occupations predominantly worked as office clerks or secretaries, teachers, nurses, or sales assistants. Compared to men, the percentage of mothers working in clerical/kindred roles increased at an even faster rate, showing a gender divide in the labor market.

Demand grew throughout the U.S. There was no concentrated region behind the rise of married mothers entering the labor force. Post-war economic growth fuelled demand for labor in services. This demand was a substantial contributing factor towards the unprecedented increase of mothers in paid employment.

The “Roots of the Revolution” were driven through unprecedented increases in demand for labor. Does this parallel the situation today? I think the future of married mothers’ work will depend on more than the growth of the services sector. Policies need to support equal pay for equal work, opportunities for promotions and leadership positions, affordable childcare, and equal representation across industries. These can transform married mothers’ labor force participation and occupational structures again, and these remain topics for future research.

Anne Hewitt graduated from Newnham College Cambridge in 2021 with an MPhil in Economic & Social History. Her dissertation found a story of growing demand for U.S. mother’s labor in the mid-twentieth century. She was supervised by Dr. Leigh Shaw-Taylor and supported by the Cambridge Group for the History of Population & Social Structure. Sharing this research with Women’s Budget Group was a wonderful chance to bridge economic history with modern economic policy research. She is originally from Virginia, U.S.A. and now resides in London.