A guest blog by Helena McAleer

Where has humanity gone from today’s banking industry? Once upon a time banks used to be for the people, to help everyone in the community. It has become glaringly obvious to me now that that is not the case. Let me tell you a TRUE story reminiscent of the original Grimm Brothers fairy tales, with a not so happy ending and a fairly dark undertone.

In January I moved my buy-to-let mortgage to NatWest and last week when I approached them about releasing some equity and confirming that the rental payments come from the NIHE (Northern Ireland Housing Executive), the response was that this made me in breach of my contract and it was their policy not to give mortgages to landlords who let to people on housing benefits. They then formally asked me to “seek an alternative tenant” simply because my tenant is in recipient of “Social Security/Government benefits”. I was and still am utterly disgusted by this statement.

For a little bit of background, my tenant is a lovely woman who is a vulnerable individual and whose brother lives close by. He has been a good friend to me for many years and he is also in many ways her support system. She has been an extremely reliable tenant for over 2.5 years and I have only had the NatWest mortgage for 6 months.

Natwest initially didn’t question the fact that the rent money was coming into my account from the NIHE, and when I questioned them on this they said it wasn’t their job to check where the money was coming from only that I was receiving it. So as far as I am concerned, they failed to do their due diligence and neither I nor my tenant should suffer because of this. They stated  “the mortgage should not have been agreed by our underwriters if NatWest were aware the payments were coming from DSS.”  The only options given to me from Natwest have been to find a new tenant or pay £2,500 approx to leave the mortgage and go elsewhere.

Now, I know you don’t know me but I can tell you now that there is no way I would ever kick a reliable tenant out of their home simply because they are on benefits. There was no effort made by the bank to understand the background, her circumstances or who she was as a person. It’s very black and white, it’s against their policy and that is that. I will pay the £2,500 before I ask anyone to leave their home for no good reason. And, I am currently in the process of moving my mortgage (and all my bank accounts) to a more ethical provider.

On deeper investigation I have since discovered that this policy is symptomatic of discrimination across the entire buy-to-let banking system. “A survey of 1,137 private landlords for housing charity Shelter in 2017 found that 43% had an outright ban on letting to such claimants (benefit recipients). A further 18% preferred not to let to them.” But this isn’t because landlords are necessarily discriminatory, that’s not the real story, this is because banks prohibit many landlords like myself from renting to reliable tenants just because of their circumstances. These people are not second class citizens, they deserve the opportunity to live to the same standards as the rest of society as is their basic human right.

Looking deeper into the figures about people who are on benefits we can see an even scarier story;

60% of adults on housing benefits are women

66% of all single person household benefit claims are made by women. 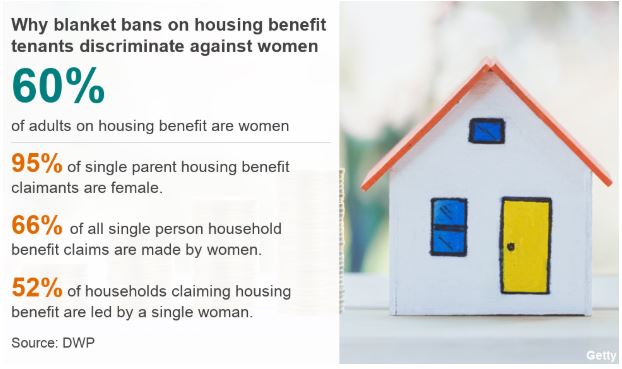 What the banks are doing is establishing a system that is designed to specifically discriminate against women. The facts speak for themselves. There are more than one million families in the UK waiting on the government to provide social housing. Surely, this could be alleviated by landlords being allowed to let to these families. According to Shelter, eight million people, myself included, are only one paycheck away from being unable to pay for their home. This issue could affect us all, not only those currently receiving social benefits.

At present this story doesn’t have an ending, only a beginning, I am petitioning the government to put the correct legislation in place to prevent banks from this systematic discrimination. To make this a success we need the support of as many people as possible, we need you to sign and share this petition as far and wide as possible to get the government to take action. We only need 100,000 signatures to have this debated in parliament.

Please sign the petition and share on Facebook, Twitter and any other social platforms you happen to be on. We have a real opportunity to make a difference to so many people’s lives. We are lucky to live in a world where determined individuals can make an impact on the world in ways that might not have been possible before.