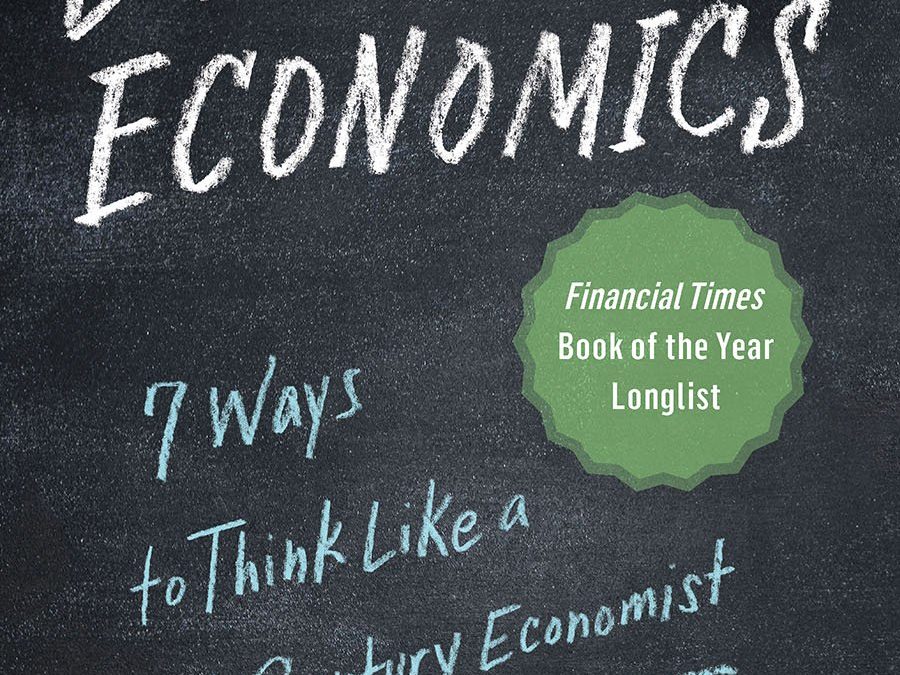 A book review of:

[We would like to thank Chelsea Green Publishing for generously providing us with a copy Doughnut Economics for review.]

Doughnut Economics is a mix between an inspiring roadmap and a call to arms for economists and citizens alike to face the complexities of today’s world head on and build a better future.

Spoiler alert: yes, it also tells us what to do about the imminent robots take over!

The 2008 financial crash and following austerity measures, the widening income inequality and the impact of climate change have raised important questions about our economic system and its viability, but very few, practical alternatives have made it into our everyday dialogue.

The ‘doughnut’ is a strong alternative: it represents the space in which planetary and human life coexist. We know that abusing or overusing resources in one side is going to have repercussions in another, and the consequences are often non-reversible. We are the first generation to see the magnitude of these problems, and, Raworth argues, we are the last one to be able to do something relevant about it before it is too late.

Economic theory has a key role to play to inform policy and reforms which will enable us to live within the doughnut, but we need to change how we see, think, teach and practice economics to do so.

Kate Raworth first walks us through the last century of economic theory to make explicit its assumptions, highlight flaws. Throughout the book she asks, ‘Why?’. She shows the reader what’s behind the assumptions and the danger of making policy decisions with a narrow timeframe that does not take into account longer term benefits or risks, from generational wealth or poverty cycles (and the myth of ‘pulling oneself from the bootstraps’), to the idea that the economy is divisive and degenerative by default so there is no point in designing or regulating it.

She then asks, ‘Why not the doughnut?’ and shows us the beginning of a possible alternative, yet to be designed and built by the next generation of economists. She does that by proposing seven major shifts in the way we think and practice economics. These are vital to respond to the interdependent and complex reality we live in, and create the foundations of an economic system that is regenerative and distributive.

One per chapter, the seven shifts debunk myths of the economic theory that dominated the last century and propose new values. Myths like the gross domestic product (GDP) and endless growth as the main policy goal, for both countries and companies; the narrow vision of the market as a self-contained mechanism with society, the planet and common goods as external elements irrelevant to the market’s objectives; and the idea that people make decisions as rational economic men would do, in isolation and without the complexities of social interactions, fluid values, or the different preferences and experiences that men, women, minorities and the whole spectrum of humankind have.

It is through practical examples, lived experiences and multidisciplinary theories that Raworth builds the foundations of the 21st century economics. Key to this way of thinking about how we live within our society and environment, is the place economics occupies, not as a stand-alone self-serving activity but as an embedded function of society to be regulated, designed and practiced in service of humanity’s wants and needs. As a consequence, economics needs to be reformed through a systems perspective, designed to be distributive and regenerative. She draws on a vast spectrum of theories and examples of what this means, passing through the first version of the game of monopoly, to alternative currency systems in informal settlements in East Africa. These experiences have to date only been realised on a small scale or in isolation and not all at once as the 21st century reality requires. This is why Doughnut Economics is as much a call to arms as it is aspirational, and inspiring.

Chapter four is the watershed moment of the book, the bridge between what we somewhat knew and what we should know to realistically influence how we live. By pushing us to jump into the complexity of systems thinking, Raworth makes us appreciate the value of the doughnut, or the proverbial same boat we all inhabit. A system is in fact a set of things interconnected in ways that produce distinct patterns of behaviour. Think about how the individual birds are part of and dependent upon the movements of the entire flock. The interactions of the forces within the system (reinforcing and balancing feedback loops) are what determines the stability of the system itself. A 21st century economist needs to be able to recognise all the feedback loops, delays and interdependencies within the system in order to design economic policy and regulatory frameworks that take into account all factors and effects these policies have on reality.

A glaring example of these effects is for example what the last century’s economic theory called ‘externalities’ because they were effects that did not fit into the closed market model of supply and demand finding an equilibrium through price and quantities changes. To pursue higher economic growth, we have allowed the exploitation and pollution of natural resources, thinking that high growth would then engender mechanisms able to clean up or fix the problems by itself. The costs populations were paying for living in polluted or drained areas (let alone the costs for future generations) was considered a ‘side effect’ or a cost that was ‘external’ to the economic model necessary to achieve growth.

A system is also constantly evolving and dynamic, can self-organise and manage resilience. Recognising economics as an evolving organism gives us all new roles to play, including the State, the market and the commons, and re-adjusts economics’ objectives towards the ‘service of human prosperity’. This ‘new’ model is intentional in its design, aiming to be distributive and regenerative, in a constant cycle of creation, use and restoration not aimed at financial accumulation or endless growth, but rather a strong dynamic system that can adjust to the inevitable highs and lows of our globalised reality.

Doughnut Economics is accessible to a vast audience, important for voters as well as politicians, everyday citizens and economists. It requires all of us to accept the task to ask the questions and come together to design the answers.