Blog post by Jessica Brown on our ECN 'Women and the Economy' blog series.

In this new instalment of our Women and the Economy blog series, Jessica Brown analyses the impact of public and private investments on female employment in Egypt. She asks the question:

Can 15 years of data shed light on trade-offs regarding investments and employment opportunities?

As national female unemployment rates hover near 25% and fertility climbs to rates higher than in 2009, Egypt seeks to increase female labor force participation (FLFP) rates and curtail population growth. However, are its methods of doing so the right ones? How can the government best facilitate creation of the additional million jobs that must be created annually to keep pace with the rising population? Finally, might current policies hurt the most vulnerable women rather than help them? This research explores the relationship between public and private investments and female employment outcomes in the MENA region. Focusing on Egypt, it quantitatively analyzes investment and labor data to test neoclassical and feminist economics theories regarding female employment. 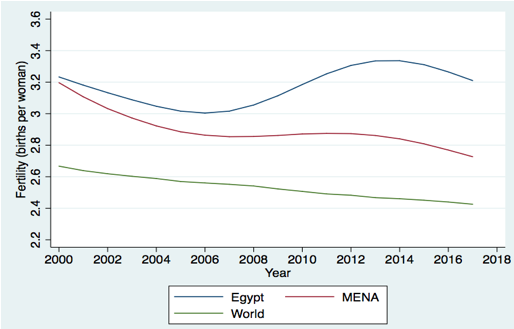 Egyptian girls and women have largely closed the gender gap in educational attainment, yet FLFP has not risen commensurately.[i]

It was not the first time Egypt had proposed employment-generating investments. Data from the Central Bank of Egypt from the past 15 years shows public and private investments that shifted between sectors over time. An analysis of these changes in sector-level investments and the percentage of women employed per sector and at the country level elicited telling findings regarding the relationship between investments and female employment in Egypt: 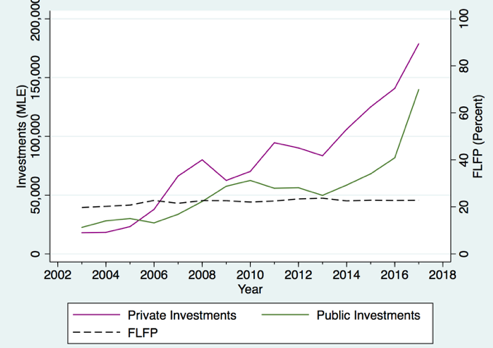 These results indicate that private investments correlate only with changes in the gender composition of each sector, rather than translating to FLFP changes at the country level. This means that while working women might shift to jobs in a new sector following a large private – but not public – investment, such investments do not systematically usher new female workers into the labor market.

A current IMF loan seeks to help Egypt boost job creation and specifically requires a focus on FLFP. However, beginning in 2016, the loan also required Egypt to implement austerity measures such as cutting subsidies, reducing the number of public servants, and enacting measures to attract FDI. These policies tend to have negative impacts on women, especially those that are most vulnerable or impoverished.[iii]

The international community should consider whether, in light of austerity’s negative impacts on women, the policy of enacting IMF reforms to attract private investment will help Egypt achieve its FLFP goals. Given the quantitative results of this analysis, the international community must consider whether the policies required to court private investment are worth the trade-offs for women. Additionally, the sector-country female employment paradox strengthens the suggestion that women hold a secondary status in the Egyptian labor market. As FLFP remains low and population growth continues, researchers should seek to understand the nuanced relationship between investments and opportunities for sustained employment that can expand women’s economic capabilities. Larger economic structural change may be needed to increase the demand for female labor at both the sector and country levels.