Reflections on the Scottish approach to gender equality

Commissioner Natasha Davies from Chawarae Teg reflects on the Commission for a Gender Equal Economy’s recent trip to Glasgow. 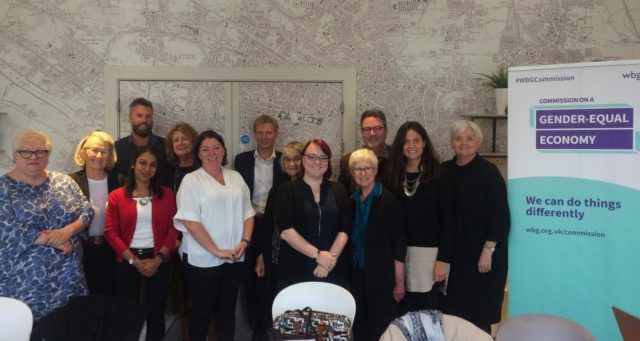 Maintaining the status quo is not an option. We must ask fundamental questions about our economic approach if we want equality.

Earlier this year the Women’s Budget Group convened a Commission on a Gender Equal Economy. The Commission brings together a number of individuals and organisations to consider the best solutions to the ongoing inequality that women face in the economy. I am very proud to be part of the Commission, as it’s an invaluable opportunity to share learning and best practice and presents an opportunity to consider some fundamental questions about how we approach economic policy.

Gender inequality is as prominent a feature in Wales as it is in the rest of the UK, and the world. Our gender pay gap stands at 13.5%. Women are less likely to be employed, more likely to be out of work as they are looking after the family or home and less likely to occupy senior positions. They are also at greater risk of poverty, harassment and abuse,

Gender inequality is not a new issue and progress to address it has often been frustratingly slow. If we continue to do things in the same way we will inevitably get the same result. It’s therefore right that we ask whether there is a different way we can manage and develop our economy that not only ensures fair impact but tackles underlying inequalities.

A key focus for the Commission is to ensure a four nations perspective; to learn from best practice in different parts of the UK and ensure that the solutions developed are relevant to all nations. The Commission visited Cardiff in July and is due to head to Belfast in November. A few weeks ago we met in Glasgow, offering an opportunity to learn more about the Scottish approach to tackling inequality and to focus discussions on paid and unpaid care.

In relation to paid and unpaid care there clearly remains a question of value. Why is it that, as a society, we place such little value on care? The simple fact is that our economy and our society would not function without people providing care, whether that’s for children, elderly relatives or others; or whether it’s provided through formal employment or in the home.

This is an age-old issue; so-called “women’s work” has been undervalued for decades. As care-work moved out of the home and from being unpaid to paid, the low value placed on it has driven issues of low pay and poor working conditions, which continue to characterise the care industry and have only been exacerbated by austerity.

It’s fair to say that the causes behind these issues are complex, but we cannot ignore the fact that policy failure has played a part. There has been no strategic response from any government, the issue is often completely absent from policy discussions and the few policies put in place to attempt to tackle the issue, such as Shared Parental Leave, are not fit for purpose. The imbalance in unpaid work is often accepted as the status quo, and despite the clear impact on women, addressing the issue does not seem to be a priority.

This is another example of how simply changing what we do will not go nearly far enough. It’s here that the ideas and approaches in Scotland provide food for thought. The approach taken to the development of new policies and initiatives, such as the Gender Pay Gap action plan and social security, is quite different. It was much more collaborative, expert stakeholders were engaged throughout; challenge was not only welcomed, but actively sought after, and the resultant policies often have some form of infrastructure in place to ensure accountability. The relationship between the Scottish Government and civil society struck me as being mature, valued and robust. Civil society seemed better coordinated, and as a result were well placed to build effective relationships with Government, while maintaining the ability to critique where necessary. That’s not to say that equality has been achieved in Scotland and sister organisations would argue that there is still some way to go to embed gender mainstreaming and drive the necessary shift in culture, attitude and power structures.

In Wales, the twentieth anniversary of devolution has encouraged many people to reflect on what has been achieved and what we want the next twenty years to look like. In this context, we recently published the Gender Equality Review, which among its conclusions, made clear that we need to radically change what we do and how we do it if we want to achieve ambitions for equality. This must include our economic approach.

Maintaining the status quo simply is not an option. We cannot continue to develop policy in the same way and expect the structural issues that seem hardwired into our economy at present to magically disappear. This is why the work of the Women’s Budget Group Commission is so important. It asks fundamental questions about how our economy should be structured, managed, developed and measured to ensure it is gender-equal.

This blog represents Natasha’s reflections on what she heard in Scotland and should not be read as the findings of the Commission, which are due to be published in Autumn 2020. You can also read this blog in it’s original form on the Chwarae Teg website.

Our series of briefings on the gender impact of policy in a number of distinct areas.

For women especially ‘levelling up’ means investment in people, not just roads and rail