On Monday 11th December the government has the opportunity to put fairness at the heart of our tax and benefit system. Stella Creasy MP, has put forward an amendment to the most recent budget asking the government to commit to analysing how its plans will impact on women before it decides on the final budget. As part of this the WBG have released a briefing in support of the amendment. You can read the briefing below and download a PDF version here.

At the November 2017 Budget, as in previous years, the Treasury failed to publish a full equality impact assessment of Budget policies.[2] The only impact assessment in the Budget documents are the Tax Information and Impact Notes (TIINS) for some measures that in each case include a sentence or two on ‘Equalities impacts’. These are very cursory and do not set out what criteria have been adopted and how the level of impact has been judged. Most simply deny that there is any impact on those with protected characteristics. There are no TIINs for two major give-aways, the freezes in fuel and alcohol excise duty rates, both of which primarily benefit men, who drive more and drink more than women. This is despite their costs to the Treasury being recorded as substantive.

There are no other equality impact assessments published with the Budget papers. It is expected that individual departments will carry out impact analysis for the measures that fall within their remits as they are implemented. However, none of the HM Treasury Budget documents mention equality analysis or make it clear when and how equality auditing will take place, nor where the results will be available.

Equality audits should be carried out at the development stage of any policy or measure to examine the potential differential impacts and design in any mitigating measures necessary. To carry out the assessment after the measure has been decided will be unlikely to result in its being modified to address any difficulties identified. If departments do carry-out equality impact assessments on proposals before they are included in the Budget, then that should be stated, and the assessment made available.

The Treasury has a legal obligation to assess equality impact

Under the Public Sector Equality Duty, all public bodies, including the Treasury, are obliged to have ‘due regard’ to the impact of their policies on equality. A number of court cases have established a series of principles about what ‘due regard’ means in practice. These include:

The main way in which public bodies can demonstrate that they have met their legal obligations under the PSED is through carrying out and publishing equality impact assessments.

What equality impact assessments would show

Analysis of the cumulative impact of tax and benefit changes from 2010 projected to 2020 by the Women’s Budget Group and the Runnymede Trust shows that the poorest are hardest hit, women will lose more than men and BME women lose most of all[4] 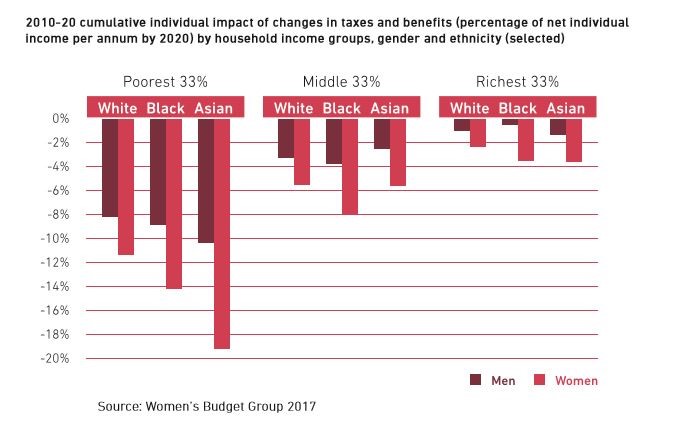 For those receiving benefits or tax credits the loss is still greater. Women will lose ten time as much as they gain from the National Living Wage or increased personal tax allowance. Black women lose 12 times as much[5].

Contribution of different benefit and tax changes since 2010 to the cumulative impact on net income by April 2021, by gender, ethnicity and employment status 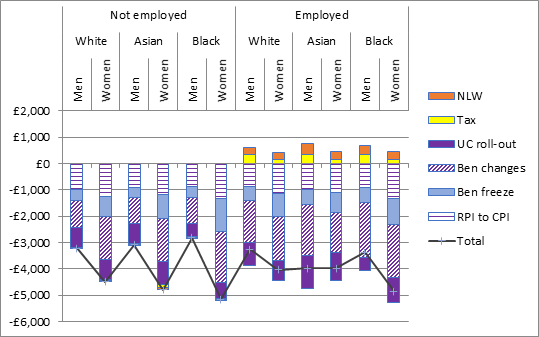 [2] For the WBG’s own cumulative impact assessment by gender and ethnicity see http://bit.ly/2ix1Uvu

[4] The EHRC has produced technical guidance on the Public-Sector Equality Duty which gives more information about what ‘due regard’ means. There is separate guidance for England, Scotland and Wales. Available at: https://var/www/vhosts/wbg.org.uk.org.uk/httpdocs.equalityhumanrights.com/en/advice-and-guidance/equality-act-technical-guidance#h1