Gender equality in the Japanese and British workplace: A neoliberal mask for economic growth?

Blog post on our ECN series "Women and the Economy"

Deborah Giustini, a PhD candidate at the Department of Sociology in the University of Manchester, compares the employment conditions, pay and culture of the British and Japanese labour markets for women.

What do the UK and Japan have in common, aside from being two powerful island economies? That both have made virtually no real progress in the last decade regarding gender equality in the workplace. The Gender Equality Index 2017 and a recent survey show that British women experience job insecurity and inequality, with the UK amongst the worst performing EU states. Japan ranked 110th on 144 countries according to the World Economic Forum’s Global Gender Equality Report 2018, the worst standing amongst the Group of Seven major economies. This blog post explores the current outlook of gender inequality in the labour market in Japan and the UK, debunking the current neoliberal rhetoric of women’s labour empowerment as a tool for economic growth, rather than a path towards increased workplace parity.

Still a struggle for working women: Gender (in)equality in the British and Japanese Workplace

In the seek for gender parity within the labour market, the Gender Equality Bureau Cabinet Office, together with Prime Minister Abe’s Womenomics, encourage Japanese women’s empowerment, an endeavour started in 1986 with the Equal Employment Opportunity Law. The British government also made a legal requirement for all large organisations in 2018 to publish their gender pay gap data by enforcing the 2010 Equalities Act. Gender equality policies are also drawing more women into the job force – in both countries, women aged 15-64 are now a significant segment of the working population. In the UK, 72.2% of women are employed, representing 46.5% of the total labour force (Office for National Statistics 2018). In Japan, women’s presence is at 68.4 % against 85.6% of men (ILO 2017). Nonetheless, against this seemingly positive background of increased labour participation, the workplace often remains unattractive for British and Japanese women with regards to quality of conditions and fulfilment. Underlying gender roles division, combined with neoliberal economic policy, have played a major role in maintaining a gender segregated labour market and women’s discrimination. 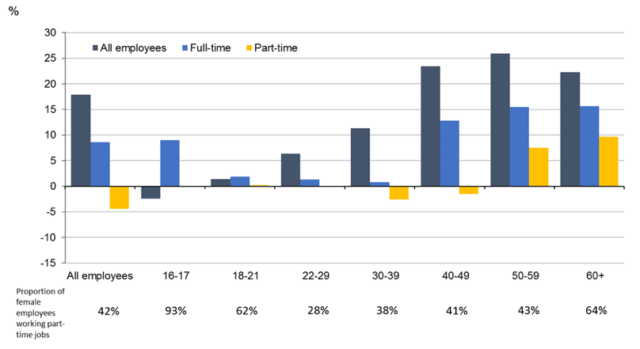 However, studies show that gender stereotypes still impact on attitudes in the workplace. British women feel often that gender discrimination constrains their professional agency and, more generally, obliges them to choose between work and family life (Broadbridge, 2010), a mindset that limits their working goals and judges them as less reliable compared to their male counterparts. While the UK male breadwinner family system is declining, concerns about the work-family conflict are still predominant, showing negative attitudes towards working mothers. 60% of women in the UK are burdened by the “double shift” (Hochschild and Machung, 2012), adding housework and childrearing to employment (Scott and Clery, 2012). Statistics associated with the work patterns of women with dependent children show that part-time work remains the most popular choice, and as the age of the youngest child in the family increases, so does the proportion of mothers in employment. However, women who have been away from their jobs and who have fewer years of full-time employment more difficultly progress in their careers. Only a few get to the top: the 2018 WEF’s report shows that only 27% of executive director roles are filled by women.

Whilst in the UK the major issue seems to be the work-family concern, in Japan the biggest issue is a sexist working culture, also well-known for the extreme burdens it places on employees. Although overt discrimination is prohibited by law, women encounter a wage gap of more than 30% and face gender barriers in deciding to be assigned to either the “managerial track” or “clerical track” when entering the formal economy. The managerial track requires strong commitment: sudden transfers to other branches throughout the country as a requirement for promotion; extreme presenteeism; very long working hours; frequent night and often unpaid overtime and meetings for core team members; late night team building and client entertainment. Since men are culturally conceived as “breadwinners”, the managerial track is configured in terms of male achievement. Women are instead discouraged from entering and remaining in the labour market. They are often pushed to the clerical track because of sexist assumptions about their skills and capacity to survive such an overwhelming working culture, as well as the tacit norm that they will eventually resign when married or with children as the expected female life course, and will not thus dedicate fully to the job as men. As showed by the 2018 White Paper on Gender Equality, female managerial track employees are often treated differently than their male counterparts, and these gendered practices discourage women’s motivation for promotion throughout their careers. Because of such entrenched barriers and in view of private life events, many Japanese women tend to self-confine to the clerical track, acting as support staff and performing routine tasks. It is true that this way they face fewer working hours and responsibilities, but they are also impeded to progress to higher positions and earnings.

53% of Japanese women regularly remove themselves from regular employment. 70% of Japanese women end their careers after giving birth to their first child, stopping working for more than a decade, or “choosing” to work part-time when the children are older (a phenomenon known as the M-shaped curve). Reasons behind this pattern include “mata hara”, maternity harassment that forces women to quit or to demotion; lack of available childcare; and the assumption that women should fully manage housework, child-rearing, and elderly care within the family. Given the lack of fulfilment in the workplace, the complexity of conciliating familial aspirations for hetero-normative working women, and that full-time continuity is required for career promotion, Japanese women often need to sacrifice one or the other, to the point that it may be more “normatively successful” for those with strong familial aspirations not to be in the labour force at all. 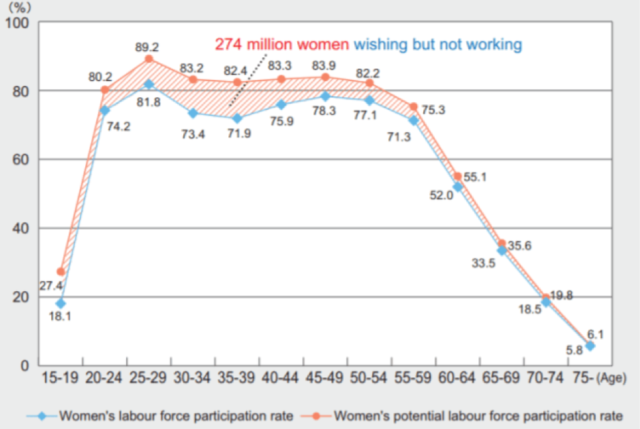 The UK and Japan seem to have acknowledged gender inequality in their recent policies towards increased labour participation in response to critical feedback. However, there is a great deal of doubt over their efficacy in promoting equal conditions for the female labour force due to state and industry economic concerns.

Studies indicate that the recent shifts in women’s policies of advanced economies are not a tool for gender equality in itself, but a political and neoliberal tool to surpass economic stagnation: women are used to fill gaps in the labour force and avoid recession risks. Japan’s economy is being hampered by a declining demography, and the inclusion of highly skilled and educated women in the labour force is born out of economic desperation to fill a shrinking working-age population rather than a serious desire for parity. Structural labour market inequalities are left untouched, and thus women are left in a peripheral position, supported by the enforcement of the rhetoric of being a “good reproductive agent while engaging in paid employment to an extent determined by market standards and allowed by family commitments” (Gottfried, 2015; Takeda, 2018). On the other side, the UK Justice Secretary David Gauke vouches for gender equality as a structural tool to save “the economic potential of the nation” and to add £150 billion of economic growth by 2025 as estimated by a recent report by McKinsey – especially in the view of the Brexit (see also Allen, 2017).

Finally, and as suggested by feminist professor and critical thinker Nancy Fraser in a recent interview, changes in political economy in countries as the UK and Japan are promoting a regressive regime, where women do the lion’s share of social reproduction and waged work under deteriorating conditions. Whereas liberal feminism means helping women getting access to the system, it also means developing ways to contrast this surge of low-quality female employment – changing a sexist working culture, promoting equal workplace conditions, switching male attitudes towards sharing housework and childcare  – all to finally make the labour market a more attractive place for women.

Deborah Giustini is a PhD candidate at the Department of Sociology in the University of Manchester, working comparatively on the UK and Japan, and a member of the WBG Early-Career Network.